Check out the latest and greatest thought leadership from the Morphii team.

8 out of 10 major polls mispredicted the outcome of the 2016 election by at least 3 points.

Morphii® collaborated with EMI – Research Solutions as a part of an internal initiative to study their own methodology and practices. This exercise was designed to identify the most reliable sources of survey participants from providers across the country. Respondents – numbering 1,345 – were surveyed across demographic groups to ensure an accurate representation of American adults.

In addition to EMI’s primary objective, this study demonstrated that there is a key difference between asking people for their opinions or judgments on a topic, as opposed to asking about their feelings on the same topic. In today’s political climate, contentious races are regularly won and lost within the margin for error (plus or minus 3 points). Thus, in working with Morphii it is easy to see the potential impact of emotional measurement on the margin for error in political polling, after identifying in this study that:

Over 50% of the people who reported having “no opinion” about presidential performance and “may be” inclined to vote in the next election – also expressed an emotional response that is considered addressable.

In this test, Morphii asked people to report their core emotions in order to identify the factors driving their decision making. Traditional metrics assessed sentiment by asking people to pass a judgment. Psychology teaches that emotion is a feeling state that influences our thoughts and behavior; essentially, our hearts leading our minds.  As has been established in emotion research, more intense feelings are those upon which people are more likely to act. Thus, when surveying any subjective experience – from product use to message appeal or performance response – searching for the core emotions (and their intensities) that influence judgments, opinions, decisions, and actions is more efficient in explaining and predicting behavior than simply identifying a judgment and making categorical assumptions.

Half of the research participants were questioned using traditional response methods like Likert scales, radio buttons, and open text fields. The other half of respondents saw a mixture of traditional “question and answer” methods, alongside questions that applied Morphii Technology to allow respondents to self-report emotions and the intensity of their feelings on a continuous scale. Morphii’s flexible, nuanced interface provided valuable insights when corroborated alongside traditional methods by delivering insightful and reliable data with great efficiency, and also data that differentiated between the outcomes of measuring judgement/opinion and measuring emotion.

Both sets of participants were:

Do you approve or disapprove of the way
Donald Trump is handling his job as president?

Of the 239 respondents who reported no opinion,
only 13% reported a primarily positive feeling.

The other 87% reported a primarily
negative feeling about Trump’s performance.

Do you plan on voting in the election in November?

We took a closer look at the feelings 5.63% of
respondents who reported having no opinion
of Trump’s performance and who reported they would
maybe vote in the November 2018 elections: 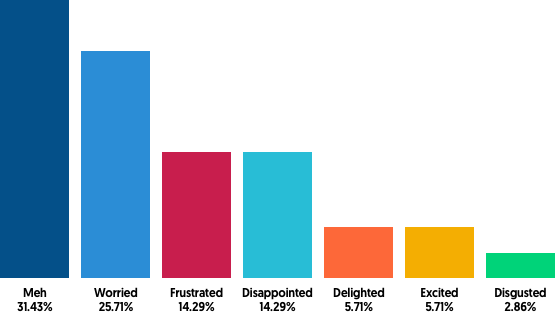 The data from this study supports the widespread notion that the role of emotions has been under-appreciated in polling efforts, political and otherwise. Evans Witt, the head of Princeton Survey Research and president of the National Council on Public Polls, was quoted saying, “We know polls do a poor job with emotion, enthusiasm, and commitment.” After the 2016 election, there was common consensus that pollsters made “correlated errors,” where small variances within the margin for error attributed to very different outcomes than originally predicted. Pradeep Mutalik, in his Quanta Magazine article, The Devil in the Polling Data, expounded on emotion as one differentiation between poll respondents and vote tallies – a correlated error – saying,

“All of us are familiar with the situation where our minds incline one way and our hearts tug another. Answering a poll is a boring intellectual exercise, while casting a ballot in the solitude of a voting booth is an empowering, emotional one.”

Morphii demystified errors like these in this study, first by focusing on those who expressed “no opinion” about presidential performance. Incorporating traditional question and response methods, alongside Morphii-enabled questions, facilitated a comparison and contrast between respondents who reported having “no opinion” and the feelings behind their professed uncertainty. More pointedly, it was confirmed that someone reporting “no opinion” does not equate to someone exhibiting a lack of emotion.

Another example was made of Morphii’s ability to produce predictive indicators to understand motivations for future behavior, as well as the actionable insights behind those motivations. Morphii engaged emotion to decode behavioral responses – accessing the core feelings shared by those who indicated that they “may” vote in an upcoming election.

These two examples are the tip of the iceberg in terms of what this data might hold.   Further trend analysis, though, will support the premise that people are motivated by their feelings when making decisions and taking action. Whether overcoming narrow or gaping polling margins, the power and relevance of measuring people’s emotions and their intensities is reaching a critical mass.

What motivational insights would political pollsters want to leverage in the next election cycle?

Follow the Morphii Blog to be the first to see additional future findings!

Have a question about our results, or how you can empower your data with Morphii? Contact us!